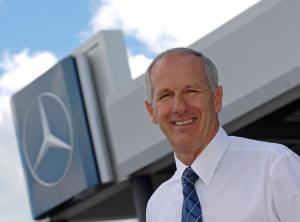 Andrew Miedecke has devoted his entire life to motorsport and the automotive industry.

Motorsport has been a passion ever since he could remember and Miedecke Motors, his car dealership in Port Macquarie on the NSW North Coast, has enjoyed over 30 years of successful sales and is a regular ‘dealer of the year’ winner.

Miedecke started racing Formula Fords in 1974, when he came second in the championship. After this he had significant success in Formula Atlantic and Formula Pacific, tried his hand at F3 in England, drove with Peter Brock and Allan Moffat and came third at Bathurst in 1997 alongside Mark Larkham

Miedecke grew up in Launceston and he used to follow his dad out to the Longford race circuit, which is where his interest in motorsport was fostered. He used to wag school so that he could watch drivers like Stirling Moss and Sir Jack Brabham race and he used to do the timing at the track. 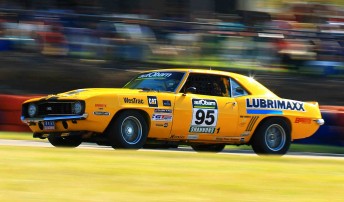 When he decided that he wanted to make something of his life his decision for choosing motorsport as a career came painfully.

“Mum was keen for me to have a career working with horses, but it didn’t work out,” Andrew Miedecke explained to Speedcafe.com.au

“I remember one day that I got up early to train a horse, I was nine or 10.

“The horse went up and I went down landing on a delicate part of the male anatomy – and it hurt! I thought that there has to be better things to do than having your balls squashed on a horse.

“I remember it very clearly; I decided then and there that I’d be a racing driver.”

Between 1974 and 1980 Miedecke raced open wheelers starting in Formula Ford and then moved to England to race Formula three, a move that he doesn’t regret, but wished he could have done differently.

“My ultimate ambition was Formula One, so I had to start somewhere.

“In F3 you need a big team with people that have the knowledge and the expertise behind them to make a go of it, which we were lacking.

“It was a mistake, but I don’t regret it, we learnt a lot, I just ran out of dough.”

After his England sojourn Miedecke returned to Australia, he still had Formula One on his mind, but an accident soon after saw him make a change in direction.

“It was a Formula Pacific race and I broke both of my legs; it was then that I thought that I’m never going to be a Formula One world champion so I better go out and find a real job.”

That real job came in the form of a car dealership. Miedecke opened up Miedecke Motors in Port Macquarie, a business that he still runs 30 years after its start.

“In 1980 I moved to Port Macquarie because I wanted to work for myself,” said Miedecke.

“I bought a small car dealership, which is all I could afford, with the idea of building it up, selling it and coming back to Sydney. But the town grew and the business grew so I’ve been there ever since.

“Now we employee 70 people and sell quite a few cars.”

Based in Port Macquarie, Miedecke ran his business and continued to race. During the 1980’s he raced Porsches, he was introduced to touring cars and even ran his own team.

“By the end of ‘89 I had a young baby and I had a car dealership in Port Macquarie that I had taken a lot of money out of so I could go racing. The racing team by this time was in Brisbane; I was trying to drive and be team manager and owner and organize team sponsorship.

“Then I lost a car at Lakeside. It just got too much.”

“I agreed to join Brock as long as Alan Gow stayed on and looked after me because it was a revolving door at Brock’s and I didn’t want to be part of that,” said Miedecke

“We did the first couple of races in New Zealand where we were nicely on the pace, after that Gow went over to England to TOCA (governing body of the British Touring Cars) and I was left alone.

“I ran most of that year with Brock, but it was pretty unsatisfactory.

“I got on well with Peter, but the equipment that I had wasn’t doing much for my reputation, that’s when I stopped being a full-time driver.”

After giving full-time driving away, Miedecke continued to compete in endurance races and other categories.

“I came third at Bathurst in 1997, won Targa (Tasmania) and did some Carrera Cup races. The last time I drove a V8 was at Bathurst in 2002 with Dougal McDougal.”

Miedecke’s career highlights are centered on Bathurst. In 1987 he led the race and in 1997 he came third with Mark Larkham.

“In 1987 I raced a Ford Sierra with Don Smith and it was a good year,” said Miedecke.

“We were on pole at Sandown and we lead Bathurst for the first couple of hours.

“I wasn’t well known, the European teams were out, we had an Andy Rouse kit car and we gave it to them.

“We had the ultimate speed, had it kept going we would have been right up there at the end.

“Coming at third at Bathurst in 1997 was also wonderful; (Mark) Larkham is a good guy so it was great to experience that with him.”

Miedecke raced Porsches in 2003, but his racing came to a sudden stop when his wife fell ill.

“I did Carrera Cup in 2003, but my heart wasn’t in it, my wife was diagnosed with breast cancer that year, which made it extremely tough,” said Miedecke.

“I stopped racing really. I did the odd race, looked after the business and looked after my wife until last year when she passed away.”

Following the passing of his wife, Miedecke got the offer to race in the Touring Car Masters.

“Bob and Sharon Middleton offered me the opportunity to race in the Touring Car Masters series,” Miedecke said.

“Since then I’ve been flat out.

“My job at the moment is to concentrate on Touring Car Masters and to try and improve upon my fourth position (in the series).”

Not one to look back, Miedecke has enjoyed his racing career and is looking forward to more in the future.

“I don’t think I have any regrets really, sure things could have been different, but in the fullness of time, I can look back and say I’ve enjoyed myself,” said Miedecke.

“Sure I would have liked to race in F1 or won Bathurst or a Touring Car title, but I’ve won plenty of races and have always been competitive.

“I’m respected and I can walk with my head held high, what more can you ask for?”

See video below of the Lakeside accident which destroyed Miedecke’s Ford Sierra.