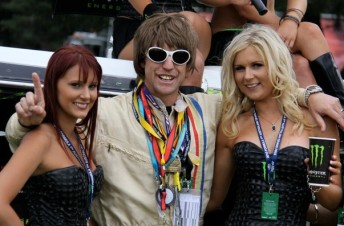 The AFL has Bryan Strauchan, the NRL has Reg Reagan and Australian motorsport has Randy Corners

Randy Corners will make his debut in the last round of the Yokohama V8 Utes Series next weekend.

Corners says that sideways will be the only way.

“It is always rewarding to add another achievement to what has already been a chequered and outstanding career!”

“I’ve chosen to drive under number 56 as a lot of championships have been run and won with that number.

“You know it’s all about going sideways, I’m looking forward to sending the Samboy Ute sideways and mixing it up with the so called big guns.”

Corners will also have his favourite mechanic ‘Justin Case’ on hand over the weekend.

“The world renowned multi-award winning mechanic will be on board on the weekend as my number one.”

Johnson has struggled to secure a full-time backer this season but has maintained great form and leads the 2010 Yokohama V8 Ute series by 86 points from Jack Elsegood.