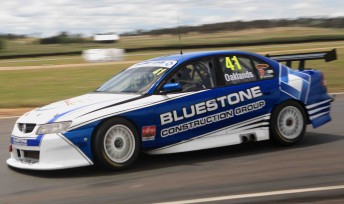 A brand-new V8 Supercars team will makes its debut in the Fujitsu V8 Series at the Sydney Telstra 500 next weekend.

Red Lion Racing Team, competing as Bluestone Racing, has entered two cars for Bruce Oaklands and John Boston, who will both make their first starts in the Fujitsu Series.

The pair of blue and white Commodores are housed in the team’s Sydney-based workshop and are represented in reverse colour schemes.

Oaklands’ Commodore is a Perkins Engineering-built chassis, last raced in the Fujitsu Series by Tim Slade. 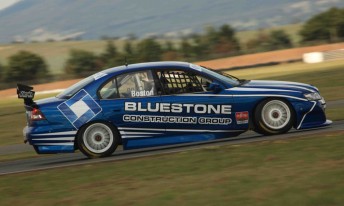 The new team plan to contest all of next year’s Fujitsu V8 Series.

Oaklands told Speedcafe.com.au that he and Boston are keeping their expectations low for their debut next weekend at the punishing Sydney track.

“Everyone expects us to come last and second last, so the main thing for us is to finish,” Oaklands said.

“There’s no great expectations for us to finish in the top 10, even though the cars may be as fast as the top 10, but obviously, it’s going to be pretty overwhelming in our first race at a street circuit as tight as Homebush.

“We were going to go to Bathurst, but everyone talked us out of it. People said that Bathurst is daunting, but looking at Homebush, it is just as bad.

“Every track has their own good and bad parts. We decided back in September that we’d leave it to Homebush because my construction company (Bluestone) is based in Sydney, so it makes sense for us to launch in Homebush.

Oaklands confirmed that both cars would contest each round of next year’s series, but is holding off on giving his 100 percent commitment to Perth’s Barbagallo Racway, which will host its first-ever Fujitsu round.

“Barbagallo has caught us by surprise – we’re going to try and go there,” he said.

“At the moment, our plan is to run both cars in all the rounds next year.”

The final round of the Fujitsu V8 Series will be held alongside the main series V8 Supercars at the Sydney Olympic Park street course.

The Fujitsu Series will contest two races around the track.