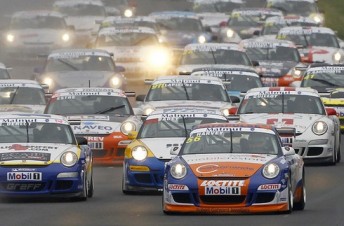 Up to 200 Porsches will compete at the famous Nurburgring circuit

Porsche has announced that it will stage its very first Carrera World Cup event at Germany’s legendary Nurburgring circuit – and there is set to be Australasian representation.

New Zealander Craig Baird, the driver with the most national/international wins in Porsche cars in the world, is likely to be joined by an Australian to compete in the inaugural event.

The Carrera World Cup will be a support class for classic ADAC Nurburgring 24 hour on June 25 next year.

The race at the Eifel mountains track will feature two classes, made up of as many as 200 Porsche 911 GT3 Cup race cars. The event will be a six-lap, 70.2-mile race around the full Nurburgring track.

Porsche Cars Australia motorsport manager Jamey Blaikie told Speedcafe.com.au that he is aiming to have Baird and other local represented in the event.

“We will potentially be sending some competitors, and yes, Bairdo is one of them” he said.

“It’s a support race for the Nurburgring 24 in June. There’s a couple of competitors who have already signed up for Carrera Cup who have already shown interest in it, and we’re working with Porsche in Germany to make it happen.

“It could be a fantastic event to be involved in.”

The race will count as a round of other Porsche Carrera Cup championships from around the world, including Germany, Scandinavia, France and Italy.