Aussies on the podium around the world

Aussies on the podium around the world

Lehane on the podium in Italy, Sera second at SuperNationals in the USA 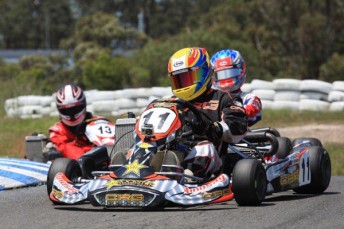 The future of Australian motorsport appears to have a bright future with several young drivers starring on the world karting scene across the weekend.

The 14 year-old finished third in the event which attracted 250 drivers from 55 countries in identical Rotax-powered 125cc karts.

Lehane’s fellow Australians in the junior ranks Jonathon Venter and James Macken, finished 21st and 23rd, both having eventful races and often coming off second best courtesy of the very aggressive European style of racing.

Unfortunately for the remaining seven Australian drivers competing at La Conca in Italy they endured some bad luck and were unable to transfer their speed into results after being crashed out of heat races or finals.

Joining Lehane on the podium amongst some of the world’s best drivers was David Sera at the 14th Annual SuperNationals in Las Vegas, America.

Sera was among a group of ten Australian’s competing at the event – one that attracts the best drivers that America, Europe, Brazil and Mexico have to offer. 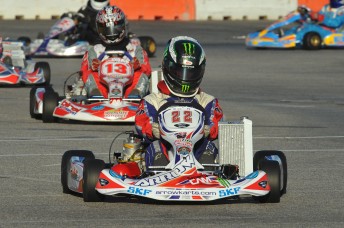 David Sera on his way to second place at the 14th Annual SuperNationals in Las Vegas. Pic: photowagon.com.au

The Victorian, who is regarded as Australia’s top karting protégé, was forced to start from 29th in the 40-kart grid for the main event due to a technical issue in the opening heat.

While many drivers would have let this faze them Sera saw it as a challenge as he charged towards the front during the 25-lap final.

With a handful of laps remaining Sera had found his way past former Indy 500 Champion Dan Wheldon and onto the back of the leading pack. As the leader came onto the main straight for the final time Sera pulled out of the slipstream only to be blocked by the leader causing the pair to collide.

As a result of the impact Sera crossed the line 0.001 seconds behind the race winner.

“If you told me last night that I was going to finish second I would have been happy with that, but to come so close it a bit disappointing,” said Sera.

“By mid race I was thinking that a top five was a realistic goal and then I kept catching the leaders and it made me determined to chase them down to take the win.

“When we came onto the main straight for the final time, the leader went left so I went right – then he came across on me and we came together and crossed the line on top of each other.

“It was real Days of Thunder style.”

Wall encountered a couple of issues during his heat races while Treseder had a trouble free run to see the pair line up on 29th and 11th respectively for the 25-lap main event.

The pair both held their own against the world’s best during their debut in the prestigious event before Treseder claimed 14th spot and Wall 20th – a very creditable effort in what is undoubtedly the toughest category in world karting.

In the junior ranks at the American event Joseph Mawson was the best of the Australian finishers in fifth spot. The current Australian champion led on several occasions during the final, only to have a misfire hamper his performance late in the race.

Here is the TV report from Las Vegas