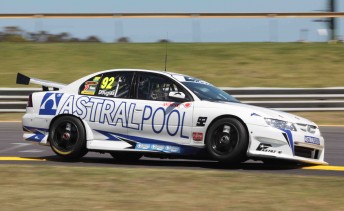 The win tops of an incredible year for the Victorian driver, who was diagnosed with and beaten Burkitt’s lymphoma, a type of cancer of the lymphatic system.

Douglas, a privateer in the Fujitsu Series, won the second race of the weekend ahead of Tim Blanchard and James Moffat.

“I’ll be happier when it’s not a reverse top 10, but it is still a good win. I’m pretty realistic about it though. I’m not going to get too excited yet.

“After the dramas we’ve had in qualifying and the first race, I think we can all be pretty happy with it.”

In yesterday’s first race, Steve Owen took the win from Jack Perkins. This pair will start this afternoon’s final race from the front row of the grid.