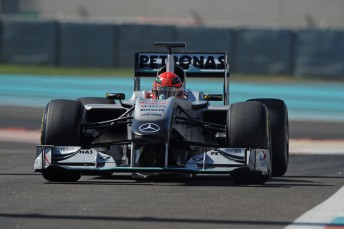 Michael Schumacher tested the Pirelli rubber for the first time

Each team of the Formula One grid have completed the two-day Pirelli tyre test at the Yas Marina Circuit in Abu Dhabi.

After Felipe Massa set the fastest time on the opening day – it was his Ferrari teammate and runner-up in this year’s title chase Fernando Alonso who set the pace on the second day.

“Overall, I am quite happy with the behaviour of the tyres,” Alonso told AUTOSPORT.

“They are not too different to the previous manufacturer [Bridgestone] so in a way I think it will be a very smooth transition with no big drama.

“There were a few set-up changes to the car to accommodate the tyres and try to understand the two types of tyres that Pirelli brought here. It was okay.”

A total of 15 drivers were on track: one per team apart from Force India, McLaren and Sauber, which used two drivers.

Michael Schumacher was second quickest for Mercedes, a far cry from his 2010 performances where it was cited that he struggled with the Bridgestone’s front-end grip.

“They have a very different combination,” he said when asked by AUTOSPORT if the Pirellis seemed more suited to his style.

“But for the first step, from what we have seen here, I feel positive about the tyres.”

Each car had four sets of tyres at its disposal, two medium-compound sets and two soft-compound sets, with some cars using parts of their allocations that had been left over from yesterday.

“All the teams have done plenty of laps and everyone has worked very hard. We’ve focussed on the development of the front tyre and that has given us the most satisfaction. On Monday, we begin to analyse the data collected over the last two days”

Pirelli’s testing programme will now continue at the start of December. The next private tests are scheduled to take place in Bahrain from 12-16 December, where Pirelli’s engineers will once more try out the various compounds in hot conditions. There will be another private test session in Europe during January, before all the teams reconvene at the beginning of February for the first official test.