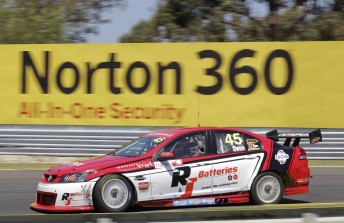 Steve Owen is confident of securing his second Fujitsu V8 Supercar Series crown at the Sydney Telstra 500 after victory at the Norton 360 Sandown Challenge.

Owen scored his third 2010 Fujitsu Series round win at Sandown, the penultimate round of the season.

The Greg Murphy Racing driver now sits 218 points ahead of David Russell with one round remaining.

After taking honours in Race 1 on Saturday, Owen placed fifth in Sunday’s reverse-grid Race 2 before finishing third in the final race, which secured him the top spot on the podium ahead of James Moffat (second) and Russell (third).

However, despite a winning round which included his sixth race win of the season, Owen will take a conservative approach when lining up for the Sydney Telstra 500 season finale with a 218 point series lead (300 points on offer in Sydney). 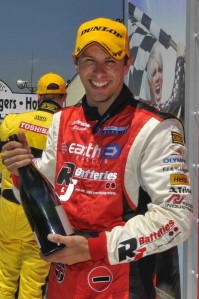 “We were in this situation in ’08 Fujitsu Series where we had a really big points lead and had mechanical problems in Race 1 of the final round,” said Owen, who went on to win the 2008 crown.

“We’ll be a little bit conservative, I’d imagine, in the first race of Sydney and have a bit of a go in the last race on Sunday and try to wrap up the round. The last thing we’ll want to do is wind up with a DNF, which could cost you the championship, which is our number one priority.”

Owen’s round win was pending the battle for the lead in the final laps of Race 3 when Russell was holding off a late challenge from Moffat. Russell won the battle by 0.04s at the chequered flag – a victory that cost Moffat the round win.

“The victory sounds a lot better than it actually was,” said Owen after Race 3.

“It was actually quite tough, even though we got pole and round win.

“There were unusually conditions out there with the track, with the tyres getting a work out along with a few of these boys out there having come a long way after their enduro experience. The car wasn’t fantastic but it was as good as anything out there and we got the job done.”

Meanwhile, Moffat, who was second for the round, was happy with his late-season form after a difficult start to 2010.

“We’ve had a pretty up and down year,” said Moffat.

“The start of the year was pretty terrible; a lot of silly things going on which shouldn’t have been happening. We’ve struggled a lot with the car as well, but this weekend I had (Ford Performance Racing Technical Director) Campbell Little working on it, so a man of his experience was only going to be a good thing. It was good to work with him and clearly the car has been the most competitive it’s been all year.”

Team Jayco’s Russell was third for the round, with Tim Blanchard and Jack Perkins scored fourth and fifth for the Sandown weekend.

Taz Douglas also impressed with a race win in the reverse-grid Race 2 – his first Fujtisu Series race win which helped elevate him to sixth place for the round.

The Fujitsu Series will return to the race track at the Sydney Telstra 500 on December 3-5 at Sydney Olympic Park.