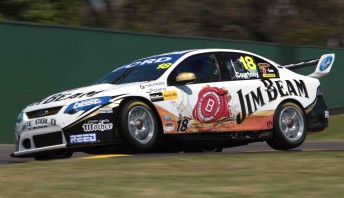 The V8 Supercar Championship Series will go down to the wire at the Sydney Telstra 500 after a closely-fought penultimate event at Sandown Raceway.

Jim Beam Racing Championship leader James Courtney took victory – his first win since Winton in May – and takes a handy 53 point lead over TeamVodafone’s Jamie Whincup into the season finale at the Sydney Telstra 500 in two weeks.

In the end, Courtney stretched a lead over to cross the line with a margin over Orrcon Steel Ford Performance Racing’s Mark Winterbottom, Whincup and Fujitsu Racing’s Lee Holdsworth.

It was Courtney’s fifth win of the year.

Winterbottom, Whincup and Holdsworth all crossed the line 0.3s.

In terms of the championship, the top four (Courtney, Whincup, Winterbottom and Craig Lowndes) still have a mathematical chance of victory.

The event was punctuated by a huge incident on lap 35 when Fujitsu Racing’s Michael Caruso tapped the rear of the Toll Holden Racing Team Commodore of Will Davison at the end of the back straight. The clash sent the pair into the tyre wall that caught out Garth Tander yesterday.

Caruso’s car nosed into the wall, similar to Tander, while Davison was spun backwards into the wall at high speed, launching his car high into the air.

The race was red flagged and restarted some 25 minutes later. The race was eventually reduced by five laps.

The final event of the V8 Supercars Championship Series will be held at Sydney Olympic Park for the second running of the Sydney Telstra 500.