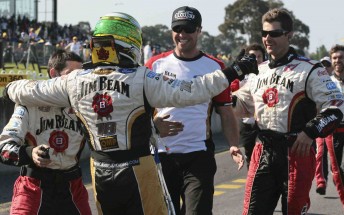 James Courtney has dedicated his victory at Sandown Raceway to his Jim Beam Racing squad after a tense race at the Melbourne circuit today.

After a horror two months of off-track team ownership wars, the Dick Johnson Racing team has kept its cool on the track, keeping Courtney in the lead of the championship.

The Gold Coast-resident dedicated the win to his hard-working crew.

“It couldn’t have come at a better time,” Courtney said.

“After Indy and Symmons, we’ve been kicked in the family jewels, but we’ve been able to step back up there and do the job.

“With the things going on in the team and everything all around us, for the boys to keep their heads down and keep focused, the win goes to them.

“They gave us the lightening stops, and we got the car sorted in the end. When we got here, it wasn’t too flash. We were chasing the track a lot over the weekend, and to nail it end was really good.”

Courtney said that the off-track issues have brought his crew of guys together.

“When things like that happen, it brings the hardcore racers together,” he said.

“We’re tighter than ever because of it. Those boys would work all night if I asked them to. It’s an unbelievable relationship we have, and this one is definitely for them.

“With everything that is going on, they’ve continued to put in the hard and long hours without knowing their future, it’s pretty amazing.”

Courtney refused to consider himself the favourite for the title, despite a 53 point advantage over Whincup with two races remaining.

“I’m sure there’s going to be a few more dramas at Homebush. It has been a pretty crazy season,” Courtney said.

“Both myself and Jamie have had some things go wrong, and for us to be here at the end and win ahead of Homebush, it’s great for the team morale. We’re stoked and we can’t wait to get there.”