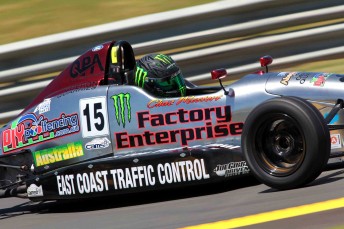 Chaz Mostert on his way to three race wins at Sandown

The Factory Enterprises driver took a clean sweep of the weekend, scoring pole and three race wins to surpass Steven Richards’s 1994 record of 13 wins in a single season.

The commanding performance from Mostert came just one week after the 18 year old wrapped up the 2010 title at Symmons Plains – becoming the youngest ever Australian Formula Ford Champion in the process.

Second overall at Sandown was Borland Racing Developments driver Ashley Walsh, who recovered from a disappointing 11th in qualifying to briefly lead Mostert in the final race.

Strong performances from Sonic Motor Racing Services drivers Geoff Uhrane and Nick Foster saw the duo take third and fourth for the round, as well as second and third in the championship respectively.

Brad Jones Racing’s Tom Williamson converted an impressive front-row qualifying performance to be fifth for the weekend, ahead of local Jesse Fenech, who starred in just his second ever national championship start.

The year though belonged to Mostert, who will compete in the 2011 Fujitsu V8 Supercar Series alongside Walsh at Miles Racing.

“We have had a great season and this is an excellent way to finish off my Formula Ford career with a clean sweep,” said Mostert.

“The season record for race wins is a nice bit of icing on the cake for us. We chased it hard this weekend after wrapping up the championship in Tassie, and have ended up winning 10 of the season’s last 12 races.

“I can’t thank Synergy Motorsport, Factory Enterprises, Monster Energy and all of our sponsors enough for giving me the opportunity to race.

“I’ve had a great time in Formula Ford over the last couple of seasons, and can’t wait to step up to the Fujitsu V8 Supercar Series in 2011 with Miles Racing.”

McConville had held the record of being the youngest ever Australian Formula Ford Champion since 1992, when the championship was known as the “Driver to Europe Series.”

“Chaz has done a fantastic job this year and is a deserved champion,” said McConville at Sandown.

“I am sure he will be in Australian motorsport for a long time to come and I wish him all the success in the world.

“I don’t have many records in motorsport, so I enjoyed hanging onto that one for 19 years!”