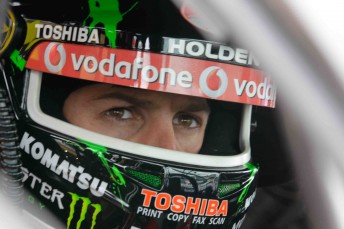 Whincup said that he is pleased with his #1 Vodafone racer.

“Yesterday, fourth was OK, but it wasn’t really where we wanted. The car was still skating around a bit, but I’m feeling good.

“And it’s a cracker day here in Melbourne.”

While Whincup was in top form, the man he is chasing in the championship was not. Jim Beam Racing’s James Courtney took ninth place, making it into the top 10 shootout, but was nearly 0.7s behind Whincup.

Just missing out on the top 10 was Greg Murphy (Castrol EDGE) and Craig Lowndes (TeamVodafone).

Courtney was ninth, just ahead of Fujitsu Racing’s Lee Holdsworth, who will be the first car to take to the track for the top 10 shootout at 12.25pm.