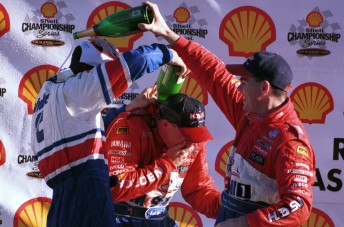 Garth Tander, Mark Skaife and Craig Lowndes on the podium in 1999

The Top 20 drivers in Australian Touring Car Championship history have been named.

In today’s News Limited papers, 11th to 20th place have been named and ordered, while the top 10 have been listed and will be ordered at a function at Sandown Raceway tonight.

Of the top 10 drivers, Ambrose is the only driver in the list not to have won Bathurst.

This weekend’s Norton 360 Sandown Challenge has been named the heritage round of the V8 Supercar Series. It is the longest serving permanent circuit in the country, making it the perfect place for an annual celebration of the sport’s heritage and to recognise its driving legends.

CLICK HERE to see the drivers that filled positions 21-50 in the top 50 Australian Touring Car drivers of all time.