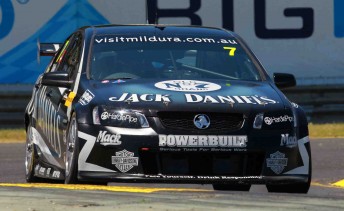 Two V8 Supercars teams have announced new backing for this weekend and next season respectively.

Todd Kelly’s JDR Commodore VE will feature ‘Visit Mildura’ across the windscreen of his entry this weekend at Sandown after striking a deal with his hometown’s local tourism group.

Also, Centaur Racing has secured backing from Homestyle Living for the entire 2011 season.

This is not the first time that the 2005 Bathurst 1000 winner will carry Mildura Tourism signage. He had support from them back in 1999 when he drove for the Holden Young Lions.

“Mildura is obviously one of our favourite parts of the world so we’re very happy to be spreading the tourism message for our hometown,” said Kelly.

“Between events we try our very best to get back up there, whether it is to do some ski racing on the River Murray or just to relax on the farm and see family and friends.

“We’re really grateful for all the support we have received from the Mildura region, right from the start of our careers. For us it all began at the Mildura go kart track when we were kids.

“Rick and I wouldn’t be professional racing drivers and wouldn’t have our own V8 Supercar team if it wasn’t for the help of the people and businesses of Mildura.”

The Homestyle Living logo will feature on the car’s front bar next season.

“The team from Homestyle Living has been following Centaur Racing during 2010 and recognised an opportunity to help us continue our growth in 2011,” said D’Alberto.

“Sponsorship is vital to our operation and our continued improvement on track, but it’s also the close-working relationships we value highly with our partners. We are always keen to be involved with their products and clients, just as they are with us.”