Mistake but pole for Whincup at Sandown

Mistake but pole for Whincup at Sandown 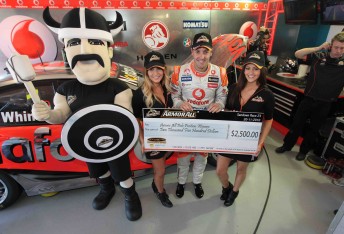 Whincup, the most prolific pole qualifier this season, edged out Paul Dumbrell, despite a small error from Whincup at Bigpond Corner.

Dumbrell impressive late-season form continued, taking his first front-row start of the 2010 season. The Bottle-O Racing Falcon will start ahead of his FPR team-mate Mark Winterbottom in the Orrcon Steel FPR Falcon.

Toll Holden Racing Team’s Will Davison and Garth Tander will start fourth and fifth and were only separated by 0.0045s.

After provisionally qualifying ninth, Championship leader Courtney picked up a number of positions and will start sixth ahead of Lee Holdsworth (Fujitsu Racing) and Russell Ingall (Supercheap Auto Racing).

The Jack Daniel’s Racing cars of Rick Kelly and Todd Kelly were impressive in the provisional session, but in the shootout, they failed. The pair of black Commodore VE will start from ninth and 10th.

CLICK HERE for the provisional qualifying race report and results …