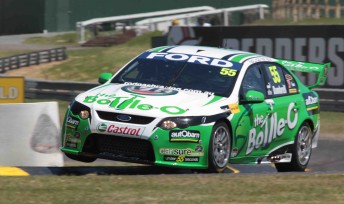 Dumbrell celebrated by jumping onto the roof of his #55 The Bottle-O Falcon.

Whincup took second place, while Jim Beam Racing’s James Courtney finished fourth, maintaining his lead of the V8 Supercars Championship. The gap between the pair in the championship is now 32 points.

The original start to the race was red-flagged after Toll HRT’s Garth Tander crashed at the fast left hander at the end of the back straight. Tander’s crew will have to work all night to repair the heavily damaged #2 entry.