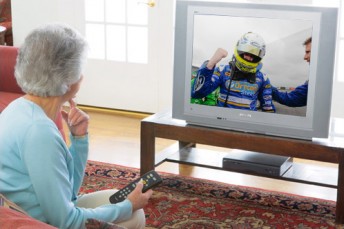 Can Mark Winterbottom repeat at Sandown this weekend?

The World Touring Car Championship stops at Macau this weekend for the famous street race. LIVE at 6.45pm Friday evening you can catch qualifying on Eurosport. LIVE coverage of warm-up can be seen on Eurosport from 9.45am Sunday morning. The first race will be telecast from 3pm with the second race LIVE on Eurosport from 4pm Sunday afternoon.

It’s the final weekend of NASCAR with all three major categories in action at Homestead-Miami Speedway. You can catch the Camping World Truck Series LIVE from 11.30am Saturday morning on SPEED TV. The Nationwide Series is LIVE on ONE HD on Sunday morning from 8am. The final Sprint Cup race of the year is LIVE on both ONE HD and SPEED TV from 4am Monday morning.

Neil Crompton and Mark Skaife can be heard on Triple M in Sydney, Melbourne and Brisbane on Saturday morning. This week’s guests are Peter Champion who owns Peter Brock’s last car, the Brock Museum and the HDT range of Commodores. Miss Universe Australia Jesinta Campbell who took a ride with Jono Webb at Symmons Plains. Greg Rust about his week in Abu Dhabi as Mark Webber fell short of the F1 World Championship. A blast from the past with Warwick Brown who won the 1977 Australian Grand Prix and took the ’75 Tasman title. Brown will be one of the stars at the Tasman Revival event at Eastern Creek.