The Big Kev Commodore VS

The Big Kev Commodore VS 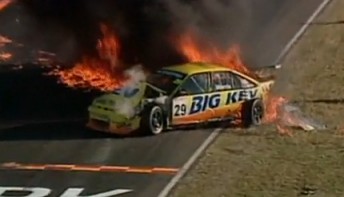 The Big Kev Commodore on fire at Oran Park in 2000

In 2000 Paul Morris drove the Big Kev Commodore. Big Kev, or Kevin McQuay, was a larger than life businessman who was famous for appearing in his own television commercials promoting the benefits of ‘Big Kev’ branded commercial cleaning products.

Morris, who had won the 1999 Super Touring Championship title, finished 19th in the 2000 Shell Championship. He had a couple of good results that year but is best known for the massive accident at the start of race three at Oran Park when his VS Commodore burst into the flames.

The Big Kev Commodore made its debut with Paul Morris at the start of the 2000 season and had only raced on seven occasions when it was involved in the massive accident.

At the start of the final race of the event at Sydney’s Oran Park, Larry Perkins had stalled on the grid with Morris drilling him from behind. Not seeing the accident Mark Larkham, travelling at an estimated 160km/h, drove straight into Morris’ stricken Holden.

“Larry Perkins stalled on the grid and I hit him,” Paul Morris told Speedcafe.com.au

“(The impact) damaged the front of the car then Larko (Mark Larkham) came from the back.

“He was going pretty fast by the time he got there and ran into the back of me.”

Larkham’s Mitre 10 Ford burst into flames. The trail of fuel on the track lit up and quickly made its way to the Big Kev Commodore as it too erupted with fire. An injured Morris got out of the car just before the fire marshals arrived on the scene.

“I don’t really think about it, it was just a car crash,” said Morris.

“I had a broken vertebra which was niggling for a few years.

“It wasn’t that big a deal really.”

Morris acquired the #29 Big Kev Holden Commodore at the start of the season; it was an ex-Holden Racing Team car.

“HRT used it for a while; it was probably the last one they built.

“They ran it as a Young Lion car and I bought it off Tony Noske.

“It did the 2000 season, I think it only did seven races with me, then I took it to Oran Park and it got written off.”

Morris agreed that it was a big accident but looked worse that it was thanks to the flames. Amazingly he does not rate the accident that highly.

“It’s not that big an accident,” said Morris.

“It’s not like when you crash a car going fast.

“You know it’s going to be big, you’re sort of sitting there hoping no one will hit me, and then they do.”

Improved V8 Supercar safety over the last decade means that an accident of that nature probably wouldn’t cause as much damage and the same injury would have been less likely.

“(If the same accident had happened today) I would have been a lot better off,” said Morris.

“There’s a lot more bar work in the back of the car and fuel cell technology is a lot better.

“The car of the future having the fuel tank in the middle of the car will make it even safer.

”You’d be better off now days as the seats are better and the side impact is better.

“That said, you still wouldn’t want to get drilled on the door in one of these things, you’d be pretty second hand.”

As for where the car is now? The car can be seen at the Morris run Holden Performance Driving Centre, which is based at Ormeau on Queensland’s Gold Coast.

“It’s sitting at work, in the reception as you walk in, it just sits there,” said Morris.

“After the accident I bought it back to the shop, stripped it, sold what I could from it and kept the body shell.

“I knew (the car) was pretty bad, because of how big a hit it was.