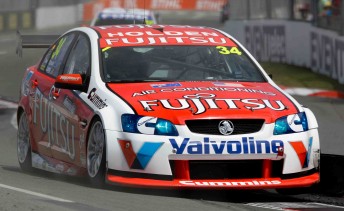 Michael Caruso will step back to an older, but refreshed chassis

Michael Caruso will use a different chassis for this weekend’s Norton 360 Sandown Challenge at the suburban Melbourne circuit.

The #34 Fujitsu Racing driver will steer GRM 10, the chassis that he used in the first half of the year before he stepped into Holdworth’s old car.

Due to the tight turnaround between Sandown and last weekend’s Tasmania round, the Garry Rogers Motorsport crew elected to prepare the older car.

While it might be an older chassis, it has some new development upgrades according to team manager Chris Harris.

“We’ve made some improvements to this car,” Harris told Speedcafe.com.au.

“In general, you try and make everything lighter, stiffer, better and easier to work on. It’s just evolutionary parts that are helping things to be nicer.

“There’s not really a market for new cars with Car of the Future coming in, so rather than building brand-new ones, it is just cheaper to update new ones.

Harris said that it is beneficial to have at least one ready-to-race chassis in the workshop.

“Next year, the calendar hasn’t turned out not too bad. There was talk that we were going to be sending cars to Singapore between the enduros, and our thinking was that we’d need to have four race-ready cars,” he said.

“The Singapore round didn’t go ahead, but the Grand Prix is still tight with Clipsal next year. The way the rest of the calendar has panned out, it isn’t that bad.

“We’ve got four cars, one of them isn’t race-able as it stands, but with the high turn arounds, you need at least one race ready spare car.”