Bright walks away from big crash at Sandown

Bright walks away from big crash at Sandown 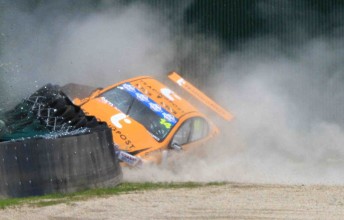 Jason Bright has walked away from a scary incident at the end of Sandown’s front-straight in the third practice session.

The throttle on the #14 Trading Post Racing Commodore VE jammed open at the end of the 260kmh front straight, sending his car sideways into the sand trap.

The Trading Post car landed on its side on top of the tyre bank.

Bright said that he thought he was going to roll over the tyre wall.

“It was quite a big one, but luckily it turned side on and spread the load over the whole car when it went into the barrier,” he told Speedcafe.com.au. “It went in sideways, lifted right up, but went in soft. I thought it was going to be a pretty big hit.

“Luckily it didn’t pick up as I went over the sand trap, otherwise it would have gone over the tyre wall. The tyre wall definitely did its job.

“The car was going pretty well. We had trouble with the throttle pedal in the first session, and obviously it is still not right. Fortunately, the car is good and hopefully it is repairable.”

The incident for the Brad Jones Racing team has come on a difficult weekend for the team. It was announced yesterday that regular team driver Jason Richards has been sidelined for the rest of the 2010 V8 Supercars season after doctors discovered a tumour in his abdomen.

This weekend, Richards has been replaced by the team’s endurance driver Andrew Jones. As a tribute to ‘JR,’ the team has left his name on the window of the #8 Team BOC Commodore VE.

Ford Performance Racing driver Steven Richards was the fastest in the third V8 practice session. The final session will be held at 3pm EDT.