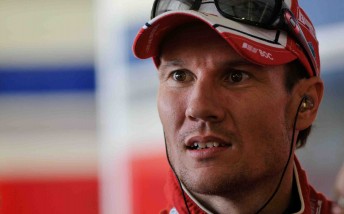 The V8 Supercars fraternity has thrown its support behind Jason Richards as the Kiwi star starts the biggest fight of his life.

It was confirmed today that that the 34-year-old has a cancerous tumour in his abdomen. CLICK HERE for full news story.

The #8 Team BOC driver will be replaced by Andrew Jones for the final two events of this year’s V8 Supercars Championship Series.

Speedcafe.com.au spoke with a number of V8 Supercars identities, who have all wished Richards and his family their full support in this tough time.

Richards’ V8 team owner Kim Jones said that he is throwing his full support behind the Kiwi and his family.

“This is a terrible thing to have to deal with,” V8 team owner Kim Jones told Speedcafe.com.au.

“Jason is a really hard fighter on the circuit, and I’m sure off the circuit he’ll fight this just as hard. We’re all here to support him and his family during this torrid time.

“He’s very much part of BJR’s family. He’s come in and given us some great results, so we’ve just got to work really hard with him now and get the very best result that he needs.

“Andrew will drive Jason’s car this weekend, but to be honest, that’s not a priority – Jason’s health is.”

Rock Racing’s Jason Bargwanna has been a rival to Richards for the past decade and hopes that this is one race that Richards wins.

“What can you say? It’s a massive shock,” Bargwanna said.

“A fit healthy, active, young guy with a young family, to get news like that, all we can do is wish him the best.

“It makes you realise that having understeer at turn one is not really a problem.”

Young star Lee Holdsworth said that Richards is one of the most popular drivers amongst the fans.

“It’s hard to know what to say, I can’t imagine how he’s feeling,” he said.

“All we can do is wish him and his family all the best and hope that he has a full recovery. We all hope to see him back here soon.

“It couldn’t have happened to a nicer bloke. He is one of the friendliest blokes in the field, the most approachable from a fan’s perspective. It’s shocking news.”