Lowndes and Whincup turn back time

Lowndes and Whincup turn back time 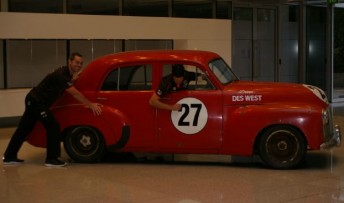 TeamVodafone V8 Supercars drivers Craig Lowndes and Jamie Whincup have wound back the clock to celebrate this weekend’s heritage round at Sandown Raceway.

Lowndes and Whincup got an inside look at the 48-215 Holden driven by Des West in the first Australian Touring Car Championship in 1960 at Holden’s headquarters at Fishermans Bend, Melbourne.

The historic 48-215 is the only surviving race car from the first-ever Australian Touring Car race, held at Gnoo Blas, near Orange in New South Wales.

The car is owned by Allan Garfoot and remains in original condition after spending 40 years in storage.

Lowndes said that it is difficult to imagine competing in that car. 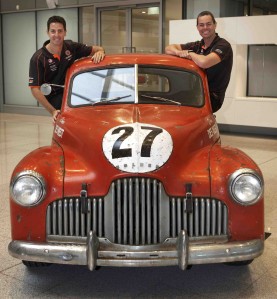 Jamie Whincup and Craig Lowndes with the 48-215 Holden

“I can’t imagine racing one of these cars around at top speed but as Des West showed back in 1960, this ripper old Holden was a competitive race car,” Lowndes said.

“Those guys were the true heroes of motor racing.”

This weekend, V8 Supercars will celebrate the 50th anniversary of the Australian Touring Car Championship. Besides the horde of historic cars that will parade at the track, the top 50 ATCC/V8 drivers have been selected by an expert panel. On Friday, 11th to 50th place on the list will be announced in the News Limited papers, before the top 10 (unordered) are confirmed on Saturday. On Saturday night at 7pm, the top 10 will be unveiled at the Sandown circuit.

Stay tuned to Speedcafe.com.au for full details as they are announced …