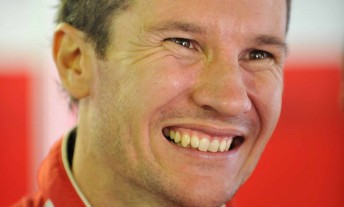 Jason Richards will not compete in the remaining rounds of this year’s V8 Supercars Championship Series after being diagnosed with cancer this week.

The 34-year-old New Zealand driver was admitted to hospital on Tuesday where doctors found a tumour is his abdomen.

Richards will be replaced by Andrew Jones as the driver of the #8 Team BOC Commodore VE for this weekend’s V8 event at Sandown.

A team of specialist surgeons is planning the best course of action for the popular Kiwi. The tumour is expected to be removed early next week. A statement from Brad Jones Racing said that the focus is on Jason’s health and his family and they have asked for privacy at this time.

All messages of support should be sent to the team or via the Jason Richards Fan Page on Facebook. CLICK HERE to offer your support on his Facebook page.

The Kiwi is widely regarded as one of the sport’s most approachable and naturally-gifted drivers in V8 Supercars.

After winning the 1999/2000 New Zealand Touring Car Championship, Richards made his V8 debut in 2000 at Bathurst and has since spent his entire V8 Supercars career in Holden Commodores, competing with Team Kiwi Racing, Team Dynamik, Tasman Motorsport and Brad Jones Racing.

Most recently, Richards finished in third place at the L&H 500 at Phillip Island with Andrew Jones.