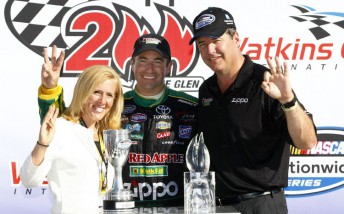 Australian NASCAR driver Marcos Ambrose will end his five-year relationship with JTG Daugherty Racing at the Ford 400 at Homestead-Miami Speedway this weekend.

Ambrose made the giant leap to NASCAR competition in 2006, signing with Tad and Jodi Geschickter’s team to drive a Ford F-150 in the Truck Series.

Since then, JTG has split from its previous partnership with the Wood Brothers and become a Toyota team in a technical alliance with Michael Waltrip Racing. The team has also brought on former NBA All-Star Brad Daugherty as a part-owner.

From Truck Series competition in 2006, Nationwide Series in 2007 and 2008 and the past two seasons in the top-flight Sprint Cup Series, Geschickter and Ambrose have been through many ups and downs as both driver and team owner scaled the heights of the sport to both reach Cup level for the time.

It must be said that without Geschickter’s gamble on an untried Aussie who had never even raced on an oval track, Ambrose is unlikely to have reached the top of arguably the world’s most competitive form of motorsport.

“It’s been a great journey for me in NASCAR,” said Ambrose, who made his NASCAR debut at Martinsville Speedway in 2006.

“I’m grateful for everything JTG Daugherty Racing has done for me and I wish them continued success in their racing endeavors.”

During his tenure at JTG Daugherty Racing, Ambrose has experienced successes, primarily on road courses but also at some of the tougher venues in NASCAR, with top fives at Cup level at places like Bristol and Talladega.

While competing in the NASCAR Sprint Cup Series, he recorded six top-five and 12 top-10 finishes. His career-best finish is second-place at Watkins Glen International in 2009.

In the NASCAR Nationwide Series, he owns three Zippo 200 victories also at The Glen. In addition, he has collected four pole awards, seven top-five and 15 top 10 finishes. In 2007, his first year in NASCAR’s second-tier series, Ambrose finished eighth in the championship standings and was 10th the following year.

In his brief stint in the NASCAR Camping World Series, he delivered two top-five and four top-10 finishes and one pole award for the team.

“That’s the one thing I wanted to accomplish before parting ways. We’re down to the final race of the season. We were leading at Homestead last season when we had a flat tire. Hopefully, we can go back there and have a great showing in our final race together.”

See below Ambrose interviewing Geschickter for ONE HD earlier this season from Indianapolis Motor Speedway, the site of Ambrose’s first Sprint Cup start with JTG Daugherty Racing, also the team’s first Cup start, where the two explain how they first met.