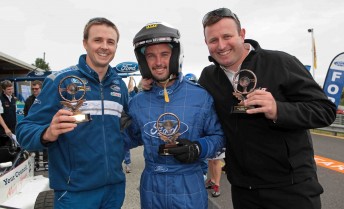 Mark Winterbottom, Shannon Byrnes and Tim Hodges were the winners of the Ford Fiesta motorkhana

Four Ford-supported race drivers and four Geelong Football Club players were invited to take the new Ford Fiesta – and a couple of Formula Fords – around a wet Sandown circuit.

The race drivers, AFL stars and a media representative were teamed up for a motorkhana event on the front straight, before each Geelong player was also given a handful of laps in a Formula Ford around the sodden circuit.

Byrnes said that he loved his experience in the Formula Ford, despite a couple of spins …

“It was a bit like ice skating out there, as I found out the hard way! I think I got a bit over confident,” he said.

“I did a 360, or how many ever spins I did. I don’t even know how many times I went around. One minute I was going straight, the next minute I was gone. And once it was gone, I couldn’t catch it.”

The dual premership player said there are little similarities been the sporting requirements of race driver and football player, but said he has respect for the job they do.

“You’re out there to win, but that’s about the only correlation between the two,” he said.

“I’ve certainly got no where near the skill as they do. They took us for a drive around in the Fiestas at the start of the day, and they were absolutely flying – they were certainly going faster in the Fiesta that I was in the race car. I’ve got a lot of respect for what they do.”

Byrnes says he already has a home planned for his trophy …

“The main thing was that I beat James Kelly,” he said.

“He’s pretty confident in his driving ability. I’m going to put that trophy in a place where he can see it everyday …”