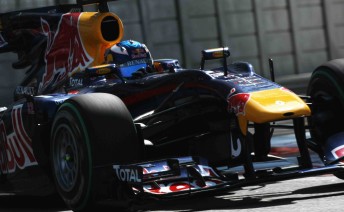 Daniel Ricciardo at the rookie F1 test at Abu Dhabi

Australian Daniel Ricciardo has dominated the first day of the Formula One rookie testing at the Yas Marina Circuit in Abu Dhabi.

The Red Bull rookie blitzed his contemporaries, working his way down to a competitive 1m39.616s – less than 0.3s slower than Sebastian Vettel’s pole position time. While it should be noted that Ricciardo set his time in better track conditions, Ricciardo continues to confirm signs that he could be Australia’s next F1 race driver.

Ricciardo, who finished second in the Formula Renault 3.5 Championship this year, beat McLaren’s Oliver Turvey by more than 1s. Turvey’s time was a last-lap effort, but the team acknoledge that he gathered a lot of useful data.

Antonio Felix da Costa, a winner in the Formula 3 Euro Series, impressed the F1 fraternity in the closing stages, improving to third fastest with 10 minutes remaining. It was the Portuguese driver’s first taste of Formula 1. Yelmer Buurman will steer the Force India car tomorrow.

Da Costa’s late improvement moved him ahead of Sauber reserve driver Esteban Gutierrez, who will be replaced by Sergio Perez tomorrow.

The man tipped to replace Nico Hulkenberg at Williams next year – Pastor Maldonado – finished the session 11th, driving for HRT.

See below for the unofficial times from the F1 rookie test at the Yas Marina Circuit in Abu Dhabi.