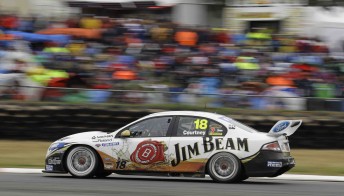 James Courtney is having a ‘championship year’ – a season where no matter how hard he tries, or what happens on the track, he somehow remains at the top of the table.

At Symmons Plains on Sunday, he had a disastrous qualifying session – his worst of 2010. Was this the first sign that his tilt at the title was coming to an end?

Through the mist on a drying circuit, the Jim Beam Racing driver charged his way up the field and looked set for a top five place. His run was compromised, though, when he collected the back of Lee Holdsworth’s Fujitsu Racing Commodore.

The clash earned Courtney a drive-through penalty, dropping him to the tail of the field.

At the time, many thought his run at the championship was done – but there was a twist.

Courtney’s rival Jamie Whincup and his TeamVodafone squad made a rare fuel calculation error, forcing Whincup into pit lane for a quick top up. It was enough to drop the reigning V8 Champ back to 15th place.

At worst, Whincup was good enough to take a top five place. The points turn around was huge. Instead of leading the championship, the gap blew out to 50 points in Courtney’s favour.

Courtney says that the scenarios that unraveled at Symmons Plains – and over the course of the season – makes for great reading.

“Dare I say, we could have been cruising (if not for the penalty), but this way makes it all that more exciting,” he told Speedcafe.com.au.

“This is why we do it – to put ourselves in high-pressure situations. That’s what as drivers get off on, coming through when everything is against you.

“It paints a pretty picture for the end of the season, there’s plenty to write about.

“A close championship is good for the sport, and hopefully we can have a good clean fight at the end.”

The penultimate event of the V8 Supercars Championship Series will be held this weekend at Sandown Raceway for the Norton 360 Challenge.