Anti-siphoning protection set to be slashed

Anti-siphoning protection set to be slashed 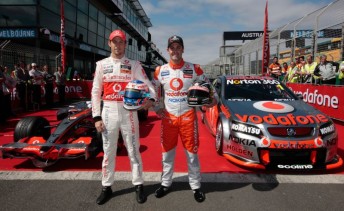 Only two motorsport events are set to be protected under new anti-siphoning laws soon to be released by the Federal Government.

News Limited National Political corresspondent Phillip Hudson has reported that the Gillard Government is nearing the conclusion of negotiations with major sporting codes and both free-to-air and subscription television networks, with a revised list near completion.

News Limited newspapers have published a list of events that will potentially remain protected, albeit as part of a heavily modified set of anti-siphoning laws that will see an ‘A and B’ list system, giving major Australian sporting lists two tiers of protection.

Talk of changes to the anti-siphoning laws, introduced over a decade ago to prevent subscription television networks buying up major sporting events and therefore denying the majority of Australian’s access, have been raging for many months. CLICK HERE to see Speedcafe.com.au’s story on the scenario from July, which includes the current list of Australian motorsport events given protection.

The latest round of reports suggest that just the very biggest Australian sporting events, the Melbourne Cup, AFL and NRL grand finals, AFL ANZAC Day match and Men’s and Women’s Australian Open tennis finals, will remain classified as events that must be broadcast live or ‘as live’ on main free-to-air channels (Seven, Nine, Ten, ABC and SBS).

Meanwhile, a second ‘B’ list would include a host of significant sports that must remain on free-to-air television, but may be broadcast on the new digital multi-channels such as ONE HD and 11 (Network Ten), 7mate and 7TWO (Seven Network), GO! and Gem (Nine Network), ABC2, ABC3 and ABC News 24 (ABC) and SBS2 (SBS). Roughly 70 percent of Australian households now have access to the digital multi-channels, which have steadily increased their ratings share in 2010.

According to reports, just two motorsport events will be on the ‘B’ list, the Supercheap Auto Bathurst 1000 V8 Supercars event and the Australian leg of the FIA Formula One World Championship, the QANTAS Australian Grand Prix.

The previous incarnation of the anti-siphoning list saw all races in the V8 Supercars Championship Series, the Australian MotoGP race and the now-defunct Gold Coast IndyCar race also protected, but it appears these will now be open to broadcast on both main and digital free-to-air channels as well as subscription television providers FOXTEL and Austar.

While the possibility of V8 Supercar races on pay TV could be opened in terms of laws and regulations, V8 Supercars Australia is likely to ensure that the sport remains on main free-to-air channels.

Indeed, AFL CEO Andrew Demetriou pointed out today that television rights are the property of sporting bodies, not television networks, emphasising that sports will work hard to ensure their properties are telecast to the widest possible audience, but that adding FOXTEL directly into the bidding process is likely to drive the price of sporting TV rights higher as well as adding flexibility to broadcast rights deals. CLICK HERE for Demetriou’s comments to The Australian newspaper.

For Hudson’s report on the latest development in the anti-siphoning television changes CLICK HERE  to read more on the Herald Sun website.