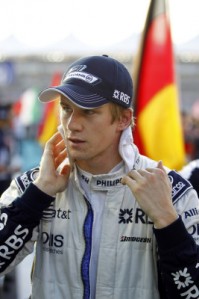 Brazilian Grand Prix pole sitter Nico Hulkenberg has been dropped from Williams for 2011.

The German, who grabbed his maiden pole position in F1 at the Interlagos track two weeks ago, announced in a statement that he has left the famous team.

It is rumoured that Venezuelan Pastor Maldonado, who won the GP2 feeder series at the fourth attempt in 2010, will replace Hulkenberg next year.

Hulkenberg said that his first option was to stay with the team next year.

“I would have been happy to stay with Williams,” the 23 year-old said.

“I want to thank the team for a great time and I wish Williams all the best for the future.”

Hulkenberg’s manager, Willi Weber, is confident that his young German driver will have a seat in the field next year.

“I am negotiating with other teams,” Weber said.

His options, though, appear slim. Renault and Lotus appear his only realistic options for a full-time drive, but he could take a season as a reserve driver.