Roland Dane gets first taste of a V8 Supercar

Roland Dane gets first taste of a V8 Supercar 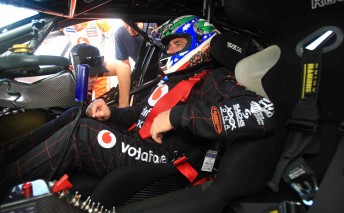 Roland Dane inside the TeamVodafone ride car at Queensland Raceway

After watching his V8 Supercars take four Bathurst 1000 wins and two V8 championships, team owner Roland Dane thought it was about time he got a feel for his champion race cars.

Last week at Queensland Raceway, Dane got his first taste of a V8 Supercar, driving the TeamVodafone ride car around the Ipswich circuit.

Dane drove the car during the day alongside News Limited’s national motoring editor Paul Gover in a ‘owner vs journalist’ showdown.

According to Dane, he won the challenge …

“I hadn’t driven a race car for 14 or 15 years. I thought about it but never bothered to do it in Australia. That was until Gover challenged me,” Dane told Speedcafe.com.au. 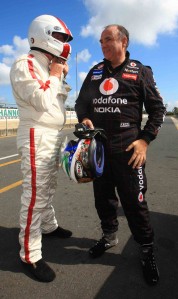 “So I thought I should have a go and see what it was like.

“I enjoyed it. The cars are actually quite light, apart from the braking. I wasn’t fast, but I was faster than him, and that was really the only thing that mattered on the day!”

While Dane has not raced any cars since his days in one-make racing in the UK, he says that he can feel why his entries are considered the best in V8 Supercars.

“People have said to me that our cars are ergonomically very good – where you sit, the steering wheel, the pedals and how it operates. It was good to get in and feel that,” he said.

“The car is brilliantly laid out, and it is just second nature, even for an old bugger like me to get in the car. Everything was second nature straight away.

“And I made sure I was on some soft tyres, so it felt good.”