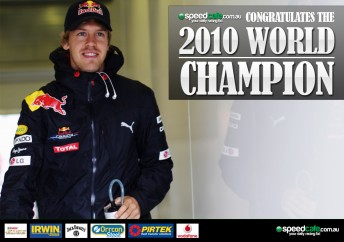 To commemorate the world championship victory for Red Bull Racing’s Sebastian Vettel, Speedcafe.com.au has released a special poster – free for you to download.

Vettel won the Formula One World Championship this morning (Australian time) after one of the toughest F1 seasons on record.

For the first time time ever, four drivers went to the season finale with a chance of winning the title, but at the end of a hard season’s racing Vettel is now the youngest-ever F1 champ.

In the end, Vettel was too good, leading the Abu Dhabi Grand Prix from start to finish. He won five Grand Prixs over the season, scored pole 10 times and was easily the fastest driver in the field in 2010.