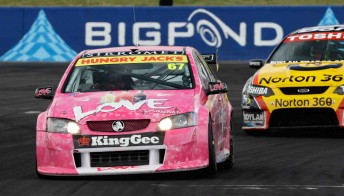 Jack Perkins will drive The Love Machine at Sandown this weekend

Jack Perkins will drive The Love Machine Commodore VE in this weekend’s penultimate round of the Fujitsu V8 Supercars Series at Sandown Raceway.

Perkins has driven a number of V8 Supercars this year in both the Championship Series and Fujitsu Series and will add the pink Holden to that list.

“I’ve driven everything this year. It has been a good year for experience, and it’s a pretty cool opportunity to drive The Love Machine,” he said.

“It’s a good car, and a good chance to get back to Sandown. It’s a good track, and I had some good success there last year actually.” The name 'Perkins' is already on The Love Machine Commodore VE

Team owner Paul Morris will return to the driver’s seat in Sydney, and will also compete at Sydney Speedway in the local championship on the Saturday night.

Morris suggested that Perkins in the pink car could improve his off-track fortunes.

“Jack has been having a bit of luck with the girls of late, so I think if he drives The Love Machine, he might be able to get his tally up a few more,” he joked.

In other Sandown Fujitsu Series news, the second Paul Morris Motorsport-prepared Fujitsu Series Commodore of Phil Foster will be driven by Ryan McLeod.

Also, regular competitors Ben McCashney and the Jay Motorsports entry have elected to miss the round.

The Fujitsu V8 Series will hold three races over the Sandown weekend.

See below for the Fujitsu Series entry list for Sandown.