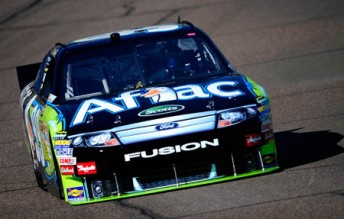 Hamlin was short on fuel and was one of several cars forced to pit late in the race, dropping the points leader down to 12th place in the finishing order.

Jimmie Johnson meanwhile was able to save enough fuel to avoid an extra stop, and by finishing fifth, closed Hamlin’s lead to just 15 points entering the final race of the season next weekend in Homestead, Florida.

The fuel mileage ending to the race was a saviour for Johnson’s title hopes. Johnson, the four-time defending NASCAR Sprint Cup champion, didn’t lead a lap. Denny Hamlin, ahead in the points and seeking his first title, led a race-high 190 laps. 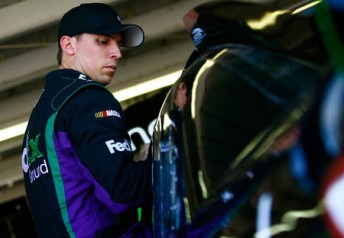 “If we ran out, yeah, we would have lost the chance to be the champions,” said Johnson of the fuel mileage.

“Before I knew it, the laps went by pretty quick. Worked themselves down to the white flag. Once I came off of Turn 2 and down the back, I felt pretty good I’d make it to the start/finish line ahead of the 11 (Hamlin).

“My emotions tried to get the best of me. I was on the edge of my seat, but I kept talking myself off the ledge.”

Hamlin was frustrated that his Camry suffered from very poor fuel mileage despite its great speed.

“Well, we had a great car and that was real important,” said Hamlin.

“We’re just going to have to go there and do it the old fashioned way next week and try to beat them on the race track.

“I’m frustrated, trust me. This is one of the bigger let downs I’ve had. I can tell you, I’m going to use this as motivation for next week to go out there and try to win.”

Kevin Harvick, who is third in the standings, 46 points behind Hamlin, was sixth in today’s race to remain the third man in contention for the title.

Marcos Ambrose had a long day at the office at Phoenix, bringing home his JTG Daugherty Racing entry in 22nd position.

Ambrose battled race long with the handling of his car, making up positions at the finish while others headed to the pits.

“It was pretty tough out there, we threw everything at the car set-up wise, but it never really responded,” said Ambrose.

“The long green run at the end without caution hurt us, with the Lucky Dog or the wave around we would have been a chance at the finish.

“We want to round the year out on a high; Homestead is going to be a big weekend for a lot of teams.

“After leading there last year, we know what it takes to get to the front, and it would be nice to finish the season with a big result.”

With only 15 points separating the top two drivers, the closest championship in the Chase for the NASCAR Sprint Cup’s seven-year history won’t be won easily.

The only way points leader Denny Hamlin can guarantee a clinch of his first NASCAR Sprint Cup Series championship is by either finishing second while leading the most laps or winning next Sunday’s season finale Ford 400 at Homestead-Miami Speedway.

Jimmie Johnson, in second, and Kevin Harvick in third, are the only other drivers still eligible to win the 2010 title. Harvick trails Hamlin by 46 points.

Hamlin’s 15-point lead is the closest margin between first and second in Chase history, bettering the 18-point difference Kurt Busch held over Johnson in 2004.