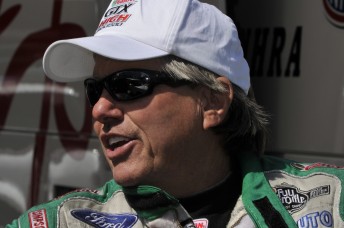 Force was joined in the winner’s circle at Auto Club Raceway at Pomona by Antron Brown (Top Fuel), Shane Gray (Pro Stock), and Eddie Krawiec (Pro Stock Motorcycle). The win was the first of rookie Gray’s career and the first of the season for Brown.

In his eight victories in the Auto Club Finals, John Force has beaten eight different opponents in the final round, defeating Kenny Bernstein, Cruz and Tony Pedregon, Bruce Sarver, Tommy Johnson Jr., Del Worsham, Jack Beckman, and now Jeff Arend. The final was as good as they come as Force eked out a 4.08 to 4.10 victory

Force, with the championship already clinched, kept the hammer down to the reach the final round, the 213th of his amazing career and 11th this season, by wheeling his 25th anniversary Castrol GTX Mustang past Densham, Bode, and then Melanie Troxel in the semifinals. Force was the class of the field, running 4.11, 4.16, and 4.13 in the three rounds prior to the final.

Antron Brown recorded his milestone 25th career victory by denying Shawn Langdon his first. After Langdon smoked the tyres early in the run, Brown raced to a 3.84 that was punctuated by a top-end fire that lit up the darkened Pomona sky. Brown, who won the Auto Club Finals 10 years apart – in 1999 on a Pro Stock Motorcycle and last year in Top Fuel – hadn’t won a final round in five appearances this season.

Brown drove his Brian Corradi- and Mark Oswald-tuned Matco Tools dragster to the final round, the 54th of his career, from the No. 8 spot, trailering Steve Torrence, low qualifier Tony Schumacher, and Morgan Lucas with a powerful display of consistency: 3.851, 3.858, and 3.863. Lucas, teammate to Langdon, had his finest outing of the season but red-lighted to Brown in the semifinals.

The championship went to Larry Dixon – the third of his career and the first for Al-Anabi Racing.

A feel-good winner was guaranteed in Pro Stock with Shane Gray looking for his first career win and Coughlin, who during qualifying announced that he’d be stepping away from the Pro Stock class in 2011, looking for a last hurrah. Gray zapped one of the class’ best leavers with a .010 light and then outpowered him, too, 6.566 to 6.658. The win also boosted Gray to fourth place in the final standings.

Gray, who in any other season would have been the rookie of the year, reached the third final round of his debut season by wheeling the Tire Kingdom Pontiac past Dave Connolly with a 6.60, then running back-to-back 6.59s to defeat Kurt Johnson and No. 2 qualifier V. Gaines.

The title went to Greg Anderson for the fourth time.

Eddie Krawiec, who won the motorcycle season-opening Gatornationals but hadn’t been back to final round since, rode home his victory in style with a blistering 6.811, the quickest pass in class history and a new national record backed up by his 6.84 in qualifying. Hector Arana, knowing the power of Krawiec’s V-Rod, took a shot at the Tree and red-lighted with a -.008 reaction time.

Krawiec, who won this race last year and was runner-up at the 2008 Finals, marched his military-themed Screamin’ Eagle/Vance & Hines Harley Davidson, ended Tonglet’s Cinderella day in the semifinals, inducing a -.001 red-light from the new champ, to reach the final round, just his second of the season. Krawiec, who qualified No. 1, defeated Freddie Camarena and Michael Phillips for the right to avenge teammate Hines against Tonglet, but his 6.92 ceded lane choice to Arana.

Here is the presentation to John Force