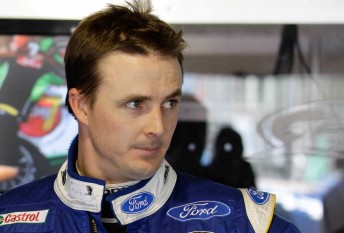 While it was joy for Winterbottom, V8’s championship leader would not be feeling the same love. James Courtney will start this afternoon’s race from 21st place, while his closest title rival Jamie Whincup will start 10th.

Russell Ingall (Supercheap Auto Racing) turned in his best qualifying performance of the season for fifth ahead of the Jack Daniel’s Racing pair of Rick Kelly and Todd Kelly.

Michael Caruso (Fujitsu/GRM) failed to set a time when he speared off the track and was bogged. The red flag his caused forced him out of the session.