For White, victory was sweet.

“When I heard we were racing for the Rodney Howell Trophy this weekend, I just had to be here,” White said. 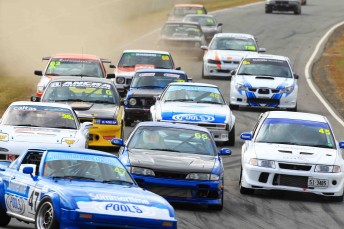 “Rodney was a great friend of mine, so it means a lot to win.

“The racing this weekend was very interesting, it was very busy and competitive out there.”

After qualifying on pole position, White won a hectic opening encounter, with a full field of 31 cars filling the 2.41km long circuit, with battles raging throughout the order.

The second race was held on late Saturday afternoon, with Greg Garwood (Porsche GT2) coming through for a surprise victory after an electrical issue on the opening lap of the first race forced him to come from the back.

Hislop finished in second position after late race contact with White, who slowed from the race lead with a troublesome differential.

White held on for third, with Fulton this time getting the better of Sherriff.

Unfortunately the Sunday morning race was cancelled due to Armco repairs stemming from an incident in an earlier Formula Ford race.

With a dry track for the finale, White leapt off the second row of the grid into the lead.

Although Garwood closed in at the finish, White’s victory was never really in doubt.

Hislop came across the finish line in third, from Sherriff, who passed a spinning Fulton at the final corner.