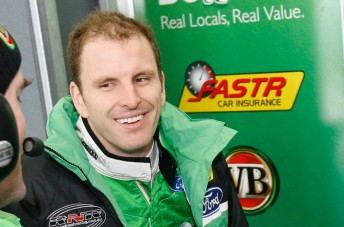 Paul Dumbrell’s decision to continue in the V8 Supercars Championship Series next year was the right one, according to team owner Rod Nash.

Just two weeks ago, Dumbrell had decided to quit the sport, but in the past two days, has performed a back flip, stating yesterday that he’ll continue as a full-time V8 Supercars driver until the end of next year.

Dumbrell’s original decision to quit has been influenced by a huge change in his life in recent times, including taking over as the CEO of Automotive Brands.

Nash, the owner of the Racing Entitlements Contract that Dumbrell competes under, says that making a short-term call was the best decision for Dumbrell.

“When you get ambushed with personal, family and business issues that you all get from time to time, sometimes it is easier to take short-term views,” Nash said.

“I think this is one of the contributing factors to him making this decision. I think we all try and think too far forward sometimes. This decision allows him to move on.”

Dumbrell is currently enjoying his best V8 Supercars season. Yesterday at Symmons Plains, he finished an equal career-best (fourth), but is sure that he’ll stop driving at the end of next year.

“We signed a three year deal at the end of last year, but I’m going in a different place in my career with the business,” he said.

“I’ll nearly be 30 next year, I’ve had a good innings, and I’ve always been one who has said I’d call it on my terms, and I’m pretty confident that I can do that.

“I have challenges inside and outside of motorsport with my pursuit of iron mans and marathons as well. That’s something that I’ll focus on in the next few years.”

See below for an exclusive Speedcafe.com.au video with Paul Dumbrell and Rod Nash.