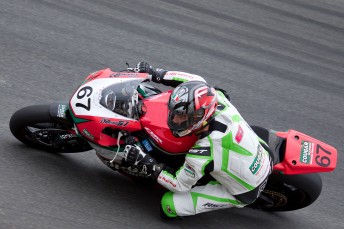 The odds were stacked against Maxwell who needed to win or take second and have Staring fail to finish, and he gave himself every chance should misfortune have struck the points leader.

The Demolition Plus GAS Honda rider soldiered on to take an impressive victory ahead of Waters, but the overall spoils went to Staring who survived a breath-taking moment negotiating lap traffic to finish 8th.

“I feel funny about it because that last race went so terribly. I couldn’t see a thing out there and it was a real battle to finish,” explained the 23-year-old.

“I couldn’t help but think about the championship in today’s race, I told myself I’d race to my own agenda but there were people passing me left, right and centre and it was certainly on my mind.

“Thanks also to Wayne (Maxwell) and the other riders who have pushed me every step of the way.”

The title of Australian Superbike Champion will be added to Staring’s previous achievements of Supersport and 125GP victories, making him the only rider in the history of national road race competition to achieve the elusive ‘triple crown’.

The Gold Coast based rider started the 2010 season without a race victory next to his name and finished the year with five victories.

Maxwell admitted a few errors earlier in the season cost him the chance to launch a real challenge today.

“We were a bit behind the eight ball this year and it probably did cost us the championship but second is a great result,” he said.

“I’m a racer, I want to win every time but that’s the way it goes. I’ve had a great year with all the guys and my team has really gotten behind me.

“The only option for me today was to go for the win and let the rest take care of itself.”

“My second season in Supersport has been close to perfect aboard the GSX-R600, it’s all panned out how I had planned and now I am hoping to get the chance to get on a Superbike and keep chasing my dream,” said Herfoss.

“The Australian championship is very competitive and I really want to get a season or two behind me on a 1000cc machine before I look towards a ride overseas.”