Vettel on pole as Webber falters in Abu Dhabi

Vettel on pole as Webber falters in Abu Dhabi 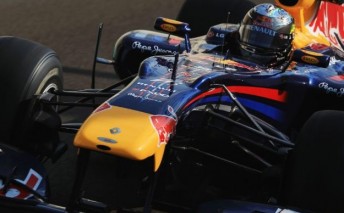 It is Vettel’s 10th pole position of the year.

Webber was placed in fourth until Alonso skipped from fifth to third, dropping Webber on the third row. He will start alongside the Ferrari of Felipe Massa.

The McLarens Lewis Hamilton and Jenson Button will take up second and fourth on the grid. Hamilton was involved in a clash with Massa in the second qualifying session.

If the drivers finished the race in the qualifying order, Alonso would win the world championship.

Vettel said at the press conference that he is looking forward to the race.

“We start from pole, it couldn’t be better,” he said.

“We went out last and we did.  It. It was a very good job by everybody and we’ll go out tomorrow and see what happens.”