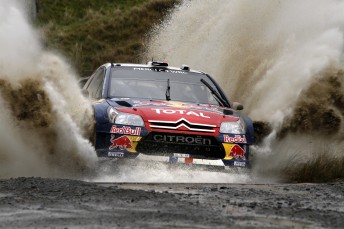 The hard luck story of the day was Ford’s Jari-Matti Latavala who was heading the field heading into the day’s final stage – but a puncture dropped him all the way to sixth.

The Finn started the second Myherin stage, the final test of the day, 4.5s in front. However, disaster struck five kilometres from the start when the Focus driver nudged a bank with his left-hand rear wheel, pushing the tyre from the rim and causing a puncture. He is now 67 seconds behind Loeb.

“The conditions have been very hard today and if you push too much it is very easy to go off the road,” said Frenchman Loeb. “The grip improved a bit in the afternoon but still it was not easy.”

Solberg, a four-time Rally GB winner, has yet to record a single fastest stage time in his privately-run Citroen, but was rapid throughout, even though he had to grapple with a broken starter motor and a gear selection fault for much of the day. “Our position is unbelievable given the problems we are having,” said the Norwegian.

Sebastien Ogier completes a Citroen podium lockout in the second works C4. The former Junior world champion admitted to struggling in the morning due to the inconsistent levels of grip but showed his undoubted potential by going fastest on the repeat of the Hafren stage.

Mikko Hirvonen heads the Ford challenge in fourth overall following Latvala’s puncture but was at a loss to explain his lack of stage-winning pace. “I’m driving just like I did last year but the time is not there,” he said.

Dani Sordo is fifth for the Citroen Junior Team with Henning Solberg seventh for the works-assisted Stobart M-Sport operation.

Matthew Wilson is the leading British driver in eighth overall. The Stobart M-Sport Focus pilot should have been further up the order but dropped 20 seconds with a spin and a stall on SS2 before losing more ground with an overshoot on SS3.

Mads Ostberg, whose Subaru Impreza has suffered from turbo and steering problems, is ninth with ex-Formula One star Kimi Raikkonen tenth on his Rally GB debut in his Red Bull-backed Citroen.