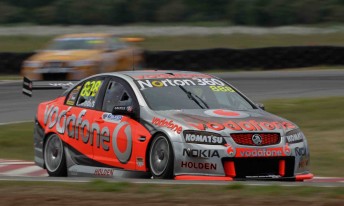 TeamVodafone winner Lowndes launched off grid two, beating pole-sitter Garth Tander off the line and racing away to a comfortable win.

It continues Lowndes’ incredible run in the last half of the season which includes victory at Phillip Island and Bathurst and is now a genuine championship threat, just 188 points behind leader James Courtney.

Toll HRT’s Tander finished second ahead of Castrol EDGE Racing’s Greg Murphy – his best result of 2010 and his first podium since Bathurst in 2008.

Championship contender Jamie Whincup (TeamVodafone) finished sixth while title leader Courtney (Jim Beam Racing) was in 11th place. It means that the points gap between the pair has been reduced to 41 points.

Also embroiled in a couple of incidents was Will Davison (Toll HRT) and Tony D’Alberto (Centaur Racing).

Qualifying and Race 22 will be held at Symmons Plains tomorrow, rounding out the Falken Tasmania Challenge.