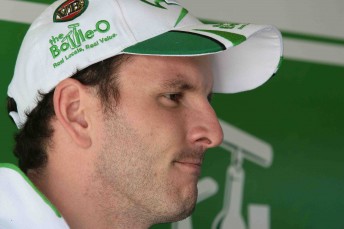 Paul Dumbrell will continue to race next season

Paul Dumbrell has decided to prolong his V8 Supercars career by one season, announcing today that he will continue to race into the 2011 season.

Dumbrell confirmed that he told team owner Rod Nash and car preparer Ford Performance Racing at the Gold Coast that he would quit at the end of the year, but has performed a back flip, deciding to keep racing for the 2011 season.

The decision to continue to race came about only in the past 48 hours.

He says that he has no plans to continue to race beyond 2011.

Dumbrell said that he wants to “close a chapter” next year with a strong season.

“Before the Gold Coast, I sat down with Rod and Tim (Edwards) and gave them my decision to not continue racing next year,” he said.

“From then, as everyone does when they retire, they consider things.

“In the last week, I’ve met Rod, Tim and the guys at The Bottle-O three or four times to see if I could come to a resolution. Either way, I was going to regret it, it was just different degrees of it.

“But I’ve come to the conclusion that I’ll continue for one more year and I’m looking forward to closing a chapter next year and ticking a few boxes that we’ve been close to this year.

“It’s been a great year to work with everyone here at FPR.

“I’ve thrown the cat amongst the pigeons on a number of occasions and surprised everyone with some of our results.”

Dumbrell’s decison to remain driving the #55 The Bottle-O Racing entry puts an end to speculation regarding a potential replacement for his seat. There was chat that Steve Richards, set to be dropped out of the #6 FPR Falcon, could replace Dumbrell. With that option now closed off, Richards will need to continue his hunt for a full-time drive.