Tight at the top of Rally Victoria

Tight at the top of Rally Victoria 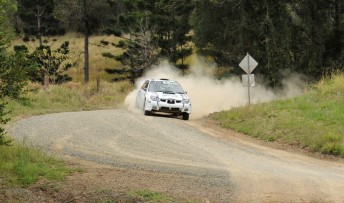 The battle for outright standings at the end of the first four Special Stages is extremely tight with Justin Dowel just a fraction of a second ahead of Glen Raymond.

Evans experienced drive-train problems causing unpredictable handling from his Tankformers Subaru and he left the road. Co-driver Sue Evans had to get out of the car and push it back onto the roadway causing them to lose well over 20 minutes.

Stepping up to take the lead after the first two stages was Raymond. The Warragul resident proved fastest by only 0.07 of a second ahead of Berwick resident Justin Dowel.

Dowel beat Raymond on the Lardner Park Super Special Stage to lead by only 0.02 of a second. Right behind Raymond is Mark Pedder with Steve Shepheard also in striking distance.

An early start tomorrow will see the crews hit the roads as the sun rises. With wet weather predicted, the event is still very much available for the taking.