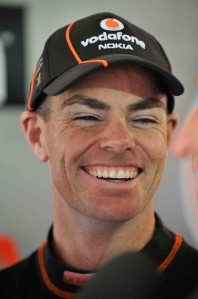 Craig Lowndes has set the fastest time on the opening day of practice at the Falken Tasmania Challenge at Symmons Plains.

The TeamVodafone driver, currently third in the V8 Supercars Championship Series, finished the session over 0.1s ahead of the rest of the field.

In terms of the leading championship contenders, Jamie Whincup (TeamVodafone) was sixth while James Courtney (Jim Beam Racing) was down in 13th place.

V8 Supercars hit the circuit tomorrow for qualifying at 11.20am.