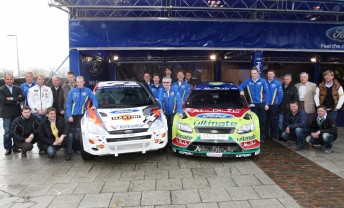 Ford’s world rally drivers from the last 12 years have started the farewell to the record-breaking Focus RS World Rally Car at a historic celebration ahead of the Rally Great Britain – the final round of this year’s World Rally Championship.

After 173 event starts, the Focus makes is making its final appearance as Ford’s team entry in the FIA World Rally Championship.  A new formula will be introduced into the WRC in 2011 and the Focus will be replaced by the all-new Fiesta RS WRC for next season.

Marcus Grönholm and Mikko Hirvonen headlined a long list of drivers and co-drivers, the Finns claimed back-to-back manufacturers’ world titles for Ford in 2006 and 2007 in Focus RS WRCs.

Grönholm and Hirvonen both have 12 WRC victories to their credit at the wheel of a Focus. Hirvonen is keen to make that 13 in the final official start at Rally GB.

The Focus made its debut in the 1999 Monte Carlo Rally.  Since then M-Sport, Ford of Europe’s rally partner, has built 97 different cars for testing and competition in the WRC.

It has won on 44 occasions, finished second in 43 rallies and taken third in 55 events.  The car has scored points on a remarkable 131 consecutive world rallies, a record unmatched in WRC history and one which dates back to the first round of the 2002 season.

“The Ford Focus RS WRC will be remembered as one of the sport’s great rally cars,” said Ian Slater, Ford of Europe’s Vice-President of Communications and Public Affairs.

“The affection in which the car is held can be seen today.  It’s unusual to reminisce with such emotion about a car, but we’ve heard many, many people fondly relating their own favourite memories and stories about the Focus RS WRC at this morning’s event.

“When the car starts Rally GB tonight, it will be strange to think that it’s the final time we’ll see an official factory team Focus in action on a WRC rally.  Victory on its final outing would be the perfect way to bring the curtain down on a great career, and both Mikko Hirvonen and Jari-Matti Latvala are targeting nothing less,” said Slater.

“I have some wonderful recollections of the car from the past 12 seasons.  The first win in Kenya was special, because the Safari Rally was the toughest in the championship and the Focus was still so new,” he said.

“But the moment that we clinched the manufacturers’ world championship with the car in New Zealand in 2006 will stay with me for the rest of my life.

“The car has evolved greatly since its debut in 1999, thanks to the work of our technical director, Christian Loriaux, and his engineering team.  The 2003 and 2005 models were the most technically advanced rally cars of their time,” added Wilson.

The all-new Ford Fiesta RS World Rally Car will debut at the opening round of the FIA World Rally Championship in Sweden next February.