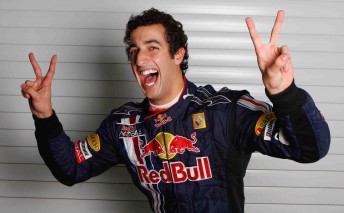 The West Australian will drive Red Bull Racing’s Championship-winning RB6 at the test in Abu Dhabi on November 16 and 17.

The Runner-up in this year’s Formula Renault 3.5 series, Ricciardo has been with the Red Bull Junior Team since 2008, winning last year’s British F3 International title.

Ricciardo has been Red Bull Racing’s reserve driver throughout 2010.

Ricciardo said that he is looking forward to his second proper F1 test, having topped the young driver’s session at Jerez last year.

“I can’t wait to get another crack at driving Red Bull Racing’s amazing Formula One car,” he said.

“I’ve been hanging out with the team and drivers all year at the races and it’s made my urge to drive the car again even stronger – if that was possible!

“It’s a year since I last drove the car (at last year’s young driver test) and I really want to make the most of the two days.”