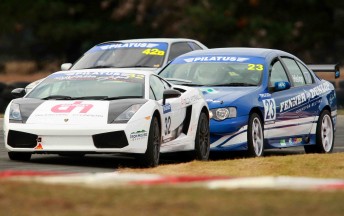 Local Tasmanian racers have turned out in big numbers for the second-annual Targa Invitationals in support of the V8 Supercars Falken Tasmania Challenge this weekend at Symmons Plains.

Burnie resident Jason White has had to burn the midnight oil to make the grid for this weekend’s race in his Lamborghini Gallardo Supperleggera.

After winning the outright Class A trophy at the corresponding meeting last year, White finished second in last weekend’s Targa High Country, which was held in regional Victoria.

Despite the strong result, the car required a catalogue of repairs to make the track this weekend, including repairs to fire damage, a new front differential, driveshafts and a window.

“It’s been a massive two-day long rebuild to get back onto the track here this weekend,” White said.

“There’s a great range of cars on the grid this weekend, it’s going to be a lot of fun, and we look forward to turning on some great racing.”

The field contains an eclectic mix of machinery, with other marques represented in the near capacity 31 car field including Holden, with several classic Torana and Commodore models, Subaru, Nissans, Mazdas, and Datsun.

Four races are scheduled for the weekend, with a 12 and a 15 lap race set down for both Saturday and Sunday.

Competitors this weekend will be racing for the Rodney Howell Memorial Trophy, in memory of the former Chairman of the TACC who tragically died in a diving accident earlier this year.

Rodney and his wife Vera owned Howell Automotive in Moonah, and were very generous in their dedication to the Tasmanian motorsport community, with the presentation of the award sure to be an emotional experience for the many local drivers in the field.