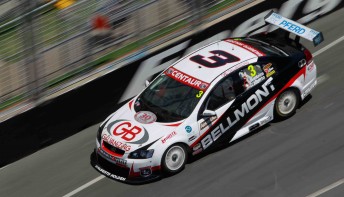 Tony D'Alberto on the streets of Surfers Paradise

Centaur Racing will have a new team manager for the remaining rounds of the V8 Supercars Championship Series.

Bertuch started with the Centaur team recently as a sub-assembler, but with the departure of Tait, he has been give an early promotion.

Team driver Tony D’Alberto said that he confident that Bertuch will do a good job in the final three events of this season.

“Lee has been working for us for a while in sub-assembly. He was working at Greg Murphy Racing, and he filled a hole that we had there, and once Darron decided to move on to different things, Lee was the ideal candidate,” he told Speedcafe.com.au.

“So Lee takes over as our team manager, and he’s already gone out and found someone else to work in the sub-assembly.”

D’Alberto says that changing the management structure at this late stage of the year isn’t ideal.

“It’s not ideal, but it hasn’t upset the guys too much. Everything has been going fairly smoothly,” he said.

“I guess the biggest thing at this point of the year is how close the rounds are, and the fact that we’ve had some damage. If we’d had a clean run, things might have been better, but when the rounds are close the there’s damage to the car, it makes for hard work.

“The boys have been working very hard, though, and we can’t wait to get to Symmons Plains.”

D’Alberto has not enjoyed much success at the Symmons Plains circuit, but he is hoping that his third visit to the Apple Isle will be more fruitful.

“The soft tyres are back for this round, and we’ve had some of our best results on them. I’m hoping we can do the same down in Tassie,” he said.

“I haven’t had a very good run at Symmons in the past. For whatever reason, it has been a bogey track for us, but everyone knows what it’s like – you only have to be a tenth off and you’re down 10 or 12 grid spots.

“It’s up to us to get the car right and for me to get the most out of it in qualifying. If we tick those off, then we just need to get the strategy right in the race.”

The V8 Supercars will be on track for the first time tomorrow (Friday).