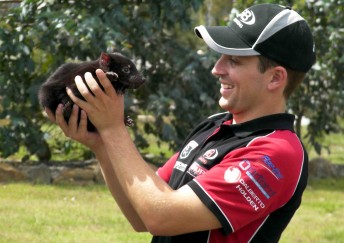 Centaur Racing’s Tony D’Alberto has spent the day leading up to the Falken Tasmania Challenge meeting some of the Apple Isle’s wildlife.

D’Alberto enjoyed acting as ‘Keeper for the Day’ at Tasmania Zoo where he participated in feeding monkeys and Tasmanian Devils, with a young devil joining him to pose for photographers and television crews.

“It was great fun, certainly not the sort of thing you get to do everyday,” said D’Alberto.

“No doubt the chance to hold a young Tasmanian Devil was a highlight. It was very placid. I did however feed an older one and it’s fair to say that my hands were well out of reach. When they bare those teeth you tend to take a couple of steps back,” laughed D’Alberto.

“I was surprised to learn that the Tassie Devils are now an endangered species and in the last 10 years numbers in the wild have dropped by up to 90 percent.”

D’Alberto visited the zoo for some media commitments, but also found it a relaxing way to prepare for this weekend’s round.

“The whole focus and activity coming into an event can be pretty full on, so spending a couple of hours amongst Tasmania’s wildlife and natural surrounds was a great way to clear the mind and relax ahead of what promises to be an exciting weekend at Symmons Plains,” he said.

In other D’Alberto news, Centaur Racing has had a shift in the team management since the last round on the Gold Coast. CLICK HERE for Speedcafe’s story …