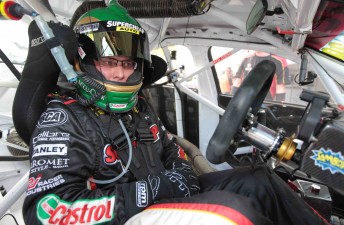 Jack Perkins says that V8 Supercars Australia should consider letting the Fujitsu V8 Series have a standalone race meeting again – and they should do it at Queensland’s Morgan Park Raceway.

Perkins, the son of six-times Bathurst winner Larry, competed at the Queensland track on the weekend in the final round of the Aussie Racing Cars Series. Perkins Jr won two of the four races, taking the overall round honours, while Kyle Clews wrapped up the series win.

Perkins, a former driver in both the Championship Series and Fujitsu V8s, says that Morgan Park would be more than capable of hosting its own development level V8 event.

“The facilities here aren’t like Bahrain or Bathurst, but you’ve still got to have grass-roots circuits on the calendar,” he said.

“The track itself is big enough to host a round of Fujitsus. It’s perfect. It’s a decent length. There’s a few bumps around, but that’s all part of a track’s character. They’ve done a good job there. It’s got a great sweeper and a few little chicanes. We had some great racing here in the Aussie Racing Cars on the weekend. 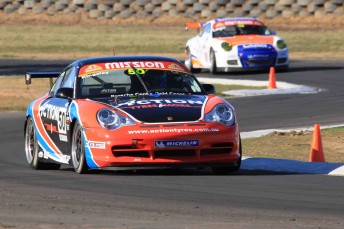 “It’s a very similar track to Wakefield Park on Winton. The circuit itself is a bit rough, but it has a high-speed kink, a quick sweeper which changes direction. It lacks lock up garages but at the end of the day, solutions can be found for that.”

The Fujitsu V8 Series once held most of its rounds as stand-alone events, including races at Wakefield Park, Winton, Mallala, Eastern Creek and Oran Park.

“They probably should have their own stand alone round again,” Perkins said.

“It adds to the personality of the championship. It’s good for the kids who are coming up through the ranks, especially where they can have their own race, draw their own crowds and helps their own profile.

“In NASCAR, the Nationwide and Truck guys have their own race meetings and they have some of their most successful meetings on their own.

“When we used to go to Wakefield and Mallala on our own, that was pretty cool. V8s should look at doing that again, if they could.”

Over the four races, Gowans won two races while Perkins won the other two.